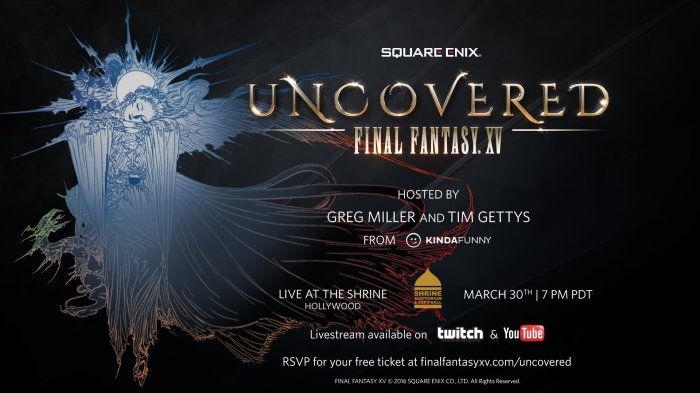 I’ll be honest with you. This game has treated me worse than any other that I can remember. It’s been what feels like half my life since it was announced, and when I heard about this stream I gave less than a fuck about it. But 1 day later while browsing the internet I saw a quote. “Final Fantasy XV looks like Kingdom Hearts.”

And here we are.

Don’t get me wrong, I LOVE Final Fantasy as a series, record label, and a muthafuckin crew. So don’t think I didn’t want this game to be great, or think it would be trash. It’s just been SO LONG and I’m tired of my heart being broken. But, I’m back for another round of punishment. So let’s see what we learned from Squeenix’s Uncovered stream shall we.

So let’s dig through the info. I’m not about to sit through this pre-show to see what happened so I’ll skip to the actual show.

So FF creator Hironobu Sakaguchi starts the show discussing his feelings on the series. I find it interesting that he is openly worried about the direction of the franchise. Being self aware is always good. After expressing his desire to return FF to its roots, the trailer above played. That rendition of “Stand By Me” is great. It’s by Florence And The Machine. Afterwards the hosts take the stage and mention 14 announcements. Mr. Sakaguchi’s appearance was the first, and the trailer was number 2. Let’s look at the other 12.

It’s called Big Bang, and on stream they actually turned the 2D image 3D and played around with it. It was pretty cool admittedly. After cameos from 2 of the FF forefathers (Mr Amano and Mr Shamura and I probably spelled these wrong), Nobuo Uematsu then popped up via cam to discuss the music of the series. I saw him and his band live. Life changing. He didn’t compose for this game, but he placed his faith in those handling the duties.

4 – Afterwards, Florence Welch of the aforementioned Florence And The Machines did a video about their Stand by Me cover. Again, it sounds really good. To me anyway. She seemed really excited about being involved, which is always nice.

In case you are avoiding gameplay spoilers and stuff, I’ll just let you watch it. Final Fantasy Radio though. Get the fuck into it.

6 – They then showed another trailer detailing the environments. It’s beautiful man. All I can think of is how great the 7 remake will look.

7 – I’m assuming this is 7 anyway. They are discussing the characters now.

Oh wait. I think this is 7. There is going to be an anime based on the game. It will detail the backstories of the 4 main characters. Hold please.

It looks great! All episodes will be online for free, and free is awesome. It’s called Brotherhood: Final Fantasy XV. Or is it FFXV: Brotherhood? Meh. Episode 1 is available here. All 5 will release before the game. It wont have a backstory for EVERYONE in FFXV though, and we now see King Regis and Luna. King Regis is obviously the father of Noctis, and Luna is Noctis boo thang. Their pictures aren’t anime looking, so I’m assuming they aren’t pivotal to that. But they look too good to be part of the game, so I think this is leading into number……

Final Fantasy XV: Kingsglaive. I’m interested, I won’t lie. And it drops this year. It’s feature length as well, and I believe it will center around the King so I’m guessing it’s before the events of the game.

9 – The Audi R8 shown in the movie trailer (which is also in the game I believe) is a 1 of 1. It’s Scarlett Jo sexy. Jesus it’s beautiful. I’ll try to get a pic. It’s not for sale sadly. I was ready to cop that.

10 – So Lena Headey comes out on stage. I have no idea who she is. *Googles* BY GAWD ITS CERSEI LANNISTER!

(Cues The Rains of Castamere)

I didn’t recognize her at all, and now I feel stupid. Anyway, she is here to talk about voice acting. She is the voice of Luna apparently. She sheds light on Kingsglaive, informing that the movie is about what’s happening in the kingdom while Noctis and the squad are going through the events of the game. And another surprise, Sean Bean (NED STARK! also from GoT) is doing voice work too! Wait a second. They got JESSE THE GAWD FROM BREAKING BAD! Aaron Paul is in the house too! Jeez. Square is making it rain. He is voicing a character named Nyx, who looks like he fucks shit up. The movie will be available to download or stream, although where was not specified.

11 – It’s time to talk sidequests. I cant find the video, but jump to 1:54:00 in the stream. I’ll try to describe what I see. The squad walk into what looks like a diner and spot what looks like a pinball machine. “LOOK GUYS, JUSTICE MONSTERS!” And yes, you can play it. It actually looks pretty cool. IThe whole name is Justice Monsters Five. Wait, its a real game! Coming to Android, Windows 10, and iOS this year. Nice surprise. This minigame will be available before FFXV launch.

12 – Next up was a trailer for the FFXV Platinum Demo, which is based on young Noctis and his pet Carbuncle. It’s already out so I won’t bother with the trailer. Just go download it from the PS or XBox store for free.This demo is significant in that it’s not part of the game. It’s separate, so you are getting some more story content that can’t be found in game. It’s set in Noctis dreams, so expect some silliness. It DOES, however, give you a chance to get used to the combat system in FFXV. So put some time in.

So. The Deluxe Edition comes with Kingsglaive on Blu-ray, a steelbook, the game, and extra DLC items. But you know, why go big when you can go bigger!

Make note that there will only be 30,000 copies of this version available, and I believe you can only get it from the Squeenix store. Preorders began already, so it’s probably sold out. Sorry. But check anyway lol. Included is a 192 page artbook, a Noctis action figure, A SECOND steelbook I believe, the entire Brotherhood anime series on Blu-Ray, and a soundtrack that covers the game, movie, and anime. Oh, and even more DLC items. I don’t remember hearing pricing info.

Well, there you…..hold on. Of course, a 15th announcement.

So there you go everyone. I have to say I’m excited all over again for this game now that I’m sure it exists. If you want to watch the stream you can find it here. I have to go now, because my bladder is being uncooperative right now. Happy gaming everyone.