Earlier this week, Assassin’s Creed IV entered stores, digital storefronts, and consoles everywhere. After selling 55 million units as a series, there’s no doubt in my mind this one’s determined to do big numbers sales wise. Sales big enough to the point there will be another game released in it’s canon around this same time next year. Depending on who you are, you’re either excited for that notion or your eyes just glazed over in the back on your head. I’m in the latter party. After six console titles, a few portable titles, a few wack tie-ins, and all the units it sold, I’m still not sure if Assassin’s Creed is actually a great series.

To date, I’ve played and completed every version of Assassin’s Creed on consoles except for the third one, which bored me to death. I haven’t actually enjoyed Assassin’s Creed in so many years, I had resolved I wasn’t going to play the new one. I eventually ended up biting the bullet and getting a copy, though I haven’t opened it yet.

Games of greatness or one big ball of mediocrity?

I remember buying the first Assassin’s Creed for my PS3. I had been reading previews in Game Informer for months. I was under the impression I’d play the game as an actual assassin. Instead, I ended up with a broken game, with horrendous load times, and one of the most repetitive experiences of my life.

When Assassin’s Creed II hit the scene, I was less excited, until I read the IGN review. IGN said the game had fixed every single problem that was wrong with part I. Ubisoft had been privy to gamers’ problem with the first in the series and vowed to make improvements based on feedback.

What followed was one of the most enjoyable experiences in the series as a whole. Everything about Assassin’s Creed II felt right. Weapon improvements, having a city to yourself, side assassination missions, and a good upgrade system, it was the complete package. Everything about the game was absolute greatness. Ubisoft must’ve realized how great it was too, because it decided at this point to turn Assassin’s Creed II into a trilogy based on Ezio. I wish they hadn’t done that. 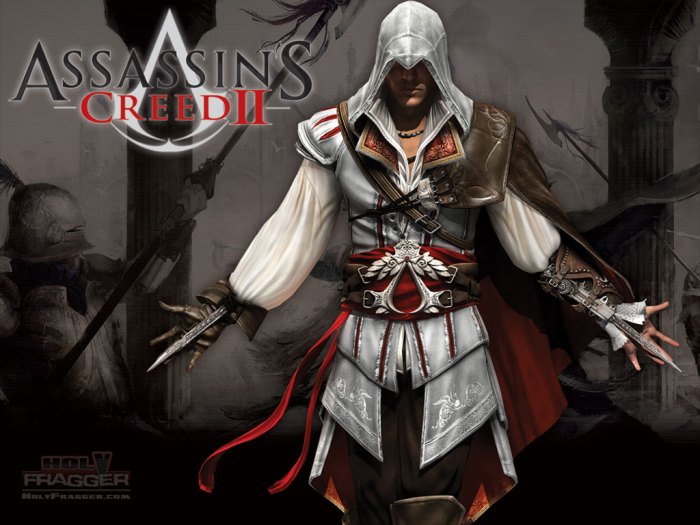 Best game in the series if you ask me.

Assassin’s Creed Brotherhood and Revelations were mixed bags of…something. For whatever reason, when Ubisoft released Brotherhood they took away the side assassination missions and based the whole game on recruiting other assassins. Instead of being able to conduct side assassination missions by yourself, you recruited others to do them for you. I’ve never understood that gameplay decision, since it was taking away a key gameplay element that made the second iteration so enjoyable.

While there were chances to customize Ezio with new clothes, gear, and buying monuments to rebuild Rome, the game was a clear cash in on the popularity of part II. Revelations didn’t add much to the fold and had the unmitigated GALL to add in a tower defense portion of the game. I’m not sure how being an assassin vibes with tower defense. Aren’t assassins supposed to stay in the dark? Quietly stalking their prey until they can kill their targets and make it look like an accident? Why the hell would they be fighting in the middle of the street? Against people with guns and cannons? With swords?

Whoever put this in the game should be fired and thrown into the fieriest pit of hell.

This brings us to Assassin’s Creed III, which by all accounts, is the worst version in the series. I’ll go on record saying I’ve read on message boards that the game eventually opened up into more awesome parts (traveling in the ship was one, as it became the basis of the Assassin’s Creed IV) but I never bothered to finished the game.

There was too much handholding and I didn’t care about the main character, Abstergo, Templars, Animi (?), or the entire lore of the game itself. Six games in six years and I was starting to feel as if Ubisoft was simply slapping on a new coat of paint and putting it’s name at the top of the game and shipping millions. Not unfamiliar if you’re into gaming, since most gamers don’t seem to mind buying the same product year after year with no real changes (yes, that was a shot at Call of Duty).

At some point it was clear that Ubisoft had forgone all the aspects of stealth gameplay and what we got was some weird action-adventure game that had a stealth element. The elements of stealth that WERE there, seemed thrown in the for the sake of the name on the box. Assassin’s Creed games were always beautiful to watch, with a decent story, and some fun gameplay when it finally stopped getting in the way of itself, but it boggles my mind this series sold 55 million units when the games haven’t really been all that good.

Here’s to being wrong.

4 thoughts on “Is Assassin’s Creed An Overrated Series?”