I’ve recently been replaying Telltale Games’ The Walking Dead and I was reminded of one thing I hated about the game. Don’t get me wrong, the game is an awesome example of storytelling and shows just how far gaming has come within the last 20 years. If you think about it, it’s kind of amazing that a point and click adventure could top so many “game of the year” lists, but that honor was well earned. With excellent pacing, wonderful characters, and a world that sucks you in, it’s easy to ignore the not-as-smooth-as-one-would-like gameplay and extra long loading times.

While there are a myriad of characters to fall in love with, The Walking Dead was also home to a number of detestable human beings. Whether it was Andy at the dairy farm, the crazy lady from Save Lots in the woods, or that really creepy guy at the end of the game, there was one character who managed to surpass all of them for “character I’d most likely shoot in the face.” That character’s name is Kenny. 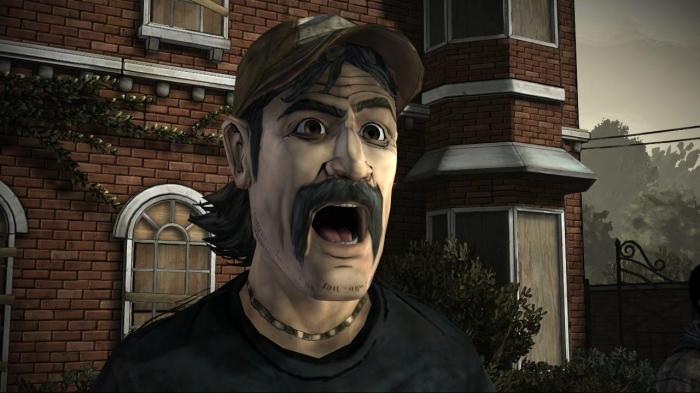 This is Kenny. He’s bad at…everything.

Kenny, father of Duck and husband of Katjaa, was…an ass. Of the highest order. Never have I ever played a videogame where I hated a supposed “good guy” more than I hated Kenny. On the off chance you haven’t played this game by now, I don’t want to ruin it for you. As a result, I figured the best way to get my thoughts out is to write a letter directly to Kenny. Kenny, if you’re out there and you happen to read this, this is for you.

I can’t think of the last time I played a videogame with a more useless character in my entire twenty-six years of gaming. In addition to being a coward, a bad decision maker, and an all-around terrible person, your mustache and hat combination are the worst things I’ve ever seen on a white man. I’m talking worse than the “hairstyle” Trevor wore in GTA.

If you weren’t accusing Lee of being able to break into cars because he was “urban” then blaming it on being from Florida, you were always somewhere hiding when shit jumped off. You always talked like you were about that life, but when it came down to getting your hands dirty, you tucked tail and ran faster than Usain Bolt in the 100 meter dash. You weren’t ever reliable and nobody could count on you to handle business. You, somehow, managed to make everything about your family, frequently lamenting about how you were trying to protect them. As it turns out, your ability to protect your family is about as good as your ability to lead our group. Which is to say, it’s pretty goddamned terrible.

Toward the end of episodes, you tried to redeem yourself. I guess that was your way of making up for being a piss poor husband, father, leader, and team member. In short, if nothing else…you suck bro. Every bad thing that happened to you was your fault and I hope you never find peace for all the days you walk this Earth.